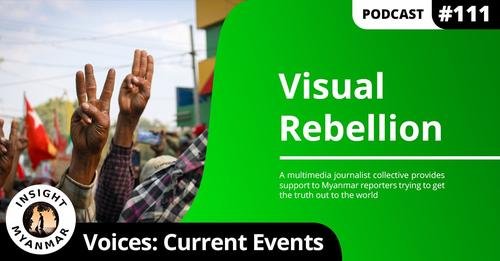 Have you ever heard about “Kintsugi”? Kintsugi is the Japanese art of repairing broken pottery with gold or silver lacquered-powder and is one of the most beautiful mending methods one may find. Why are we talking about Kintsugi? Because we would like to share with you how Visual Rebellion was conceived in a similar way, through brokenness to find strength and beauty in resistance.

In response to the deteriorating situation in post-coup Myanmar, and especially the high-risk imposed to media, Bangkok-based French correspondent Laure co-founded Visual Rebellion with Burmese creative friends, as well as colleagues based in Asia, Europe and the USA.

Two members of our team were invited to present Visual Rebellion work and vision on the Episode 111 of Insight Myanmar Podcast. Please listen to our story and support their non-profit program Better Burma.

Emerging from under decades of harsh censorship, local journalism and investigative reporting made great strides in Myanmar during the democratic transition in the 2010s. But all that was wiped out in a single blow when the military grabbed power. They began revoking licenses, arresting journalists, and torturing and even killing some in prison. This intimidation posed a real risk to anyone trying to document the current conflict, and forced many to go underground.

This is the time that they “have to be supported, because they’re the only source for all of us to know what’s happening in the country now.” according to co-founder Laure.

As soon as the coup hit, SMR103 was out on the streets covering the weeks of nonviolent demonstrations. But a very dark incident shook him to his core. “One person was killed during the protests,” he says. “He was my friend, an engineering student. I saw it with my own eyes. On that day, at least 10 were injured, and I was the only reporter there. I was the only one with the camera, and I took a picture of the injuries.”

SMR103 has since faced other dangers in his reporting. He relates a particularly scary episode when was assigned to a story about an oil refinery. As he began asking questions and taking pictures, he was accused of being a PDF soldier, taken away, and interrogated. Still, with the help of the resources that the Visual Rebellion team is providing, he persists in doing all he can to tell the story of what continues to happen in Myanmar.

“Journalism will help to end the dictatorship,” he believes. “Of course, it is all about letting the world know what is happening in Myanmar. Journalism is important because it gives current and relevant information and news to the public, to regain the interest again from the international community. I will continue covering what is happening in Myanmar. There are not many journalists left anymore to bring to the world these kinds of professional images and videos.”